We are halfway through summer, and my wife and I are bulking up our dehydrated food supply. One of our recent discussions was whether silica gel would be worth including in our dehydrated fruit packs. Sometimes we can’t get all the moisture out of our produce. (I’m looking at you, blueberries!) We wanted to know if including silica gel packets would harm our food or us.

Silica gel is food safe. Food-grade silica gel desiccants are safe to use to remove moisture from food. Silica gel will not change or permeate the food it’s packed with. It is unregulated in most countries as silica gel is inert and not toxic. In the US, the FDA recognizes that it is safe to use and does not require approval for use with food in amounts of less than 2% when added directly to food.

When I was looking into the safety of silica gel products, I found more than a few blogs claiming that silica gel is harmful. That’s not at all what the science says, and I’m happy to say that we’re confidently using it to keep our dehydrated foods mold-free.

What is silica gel?

Simply put, silica gel is a man-made form of silicon dioxide. Silicon dioxide itself is naturally occurring and can be found everywhere. Many vegetables contain it. It’s the main component of sand, quartz, obsidian, opals, and even seashells. Some speculate that silicon dioxide makes up as much as 12% of the planet’s surface. It’s very stable and is not flammable. It does react with some other chemicals, but those chemicals are rarely used outside of chemical or manufacturing plants.

In commercial forms, silica has many uses. Popular toothpaste brands use hydrated silica gel as an abrasive gel that can scrub plaque and stains off your teeth.

The type of silica gel we use to keep packaged food dry is not quite the same, even though it is the same molecule. It’s a dehydrated version and loves to bond with water, which is why it works so well as a help to control moisture.  In its bead form, it binds water molecules to its surface, sucking the molecules out of the surrounding air. The beads hold the water molecules indefinitely, or until the pellets are heated up enough to release the water. They can hold up to about 40% of their weight in water before they need to be dehydrated again. 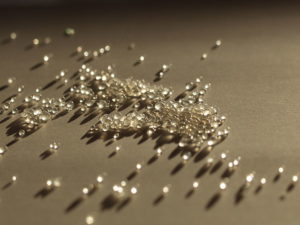 As I said above, silica gel desiccants are not harmful. Other forms of silicon dioxide, specifically ones that contain crystalized versions, can cause a variety of lung problems. Silica gel doesn’t cause the same issues because it doesn’t break down the same way. The amount of dust exposure needed to cause problems is exponentially higher than what you would experience with a lifetime of packing jars and food packs with packets. Even if a high exposure did occur,  your body could purge dust from silica gel, where crystallized silica sticks in your lungs forever.

Does Silica Gel Cause Cancer?

To my dismay, I read on multiple blogs that silica gel causes lung damage is a cancer-causing carcinogenic. Maybe you have seen those sites, too.

Most of these errors were made because silica gel and silica are not the same things, though they are both made of silicon dioxide. It’s an easy mistake to make, but it’s still a mistake.

Silica usually refers to a form of silicon dioxide that occurs in nature, is crystalized and not porous. It can easily break apart and turn into dust.

Silica gel is usually man-made, is not crystallized, and is very porous. It’s the porousness that gives it the water-binding property, or its adsorptivity.  It does not easily break apart into smaller pieces.

Silica in dust form does indeed cause a host of illnesses and conditions usually to do with lungs, including silicosis and lung cancer. Repeatedly breathing in crystallized silicon dioxide is very much a health concern.

Silica gel, which is what we use as a desiccant, has been studied to the point where it’s as conclusive as it can get. The conclusion is that silica gel is harmless, nontoxic, and not at all cancer-causing.

Color indicating silica gels, however, are a different story. Read the next section to learn why.

In 1998, the European Union outlawed Blue Indicating Silica Gel from being sold in Europe. The reason? The blue coloring comes from cobalt chloride, which is toxic in high doses. Cobalt chloride is also linked to cancer.

I want to be clear: I am no scientist. I don’t know how much Methyl Violet can be ingested and still considered to be safe. However, I know for sure that white silica gel marked as pharmaceutical-grade is widely available, so I will stick with that.

Is It Safe to Put Silica Gel with Food?

Using desiccant packets alongside food is perfectly safe, and even makes your dehydrated, vacuum-sealed food stay a little fresher. I would even argue that silica gel makes your home-packaged foods safer. They ward off mold development and other food spoilage by removing the moisture that your drying couldn’t. By placing a silica gel packet in with some dried and stabilized fruit, any extra moisture released will be bound to the porous surface of the beads.

If you live in a humid climate, throwing a packet into a jar of repacked dried goods isn’t a bad idea, either. Just remember that the more air the gel is exposed to, the more likely it will pick up and bind more water.

But what happens if the silica gel pellets accidentally touch your food directly for an extended period of time? There isn’t any reason to throw out your food, as the food industry uses its powdered form as a food additive.

My understanding is that powered silica gel is similar to the beads we use as a desiccant but on a much smaller scale. As I mentioned earlier, the FDA doesn’t regulate its use in food in amounts of less than 2% of the total ingredients.

Here are two of the most common ways it’s used in food:

There is an ongoing discussion in many of the world’s food regulatory agencies over whether nano-particles used in food manufacturing may be harmful. That question has not yet been answered, as far as I can tell. More studies followed by appropriate regulation are always welcome, but the current body of science says it’s okay. Considering how many products use it, there would be a growing body of evidence if it were a health issue.

What would happen if you ate silica gel?

You would live to see another day! Your body, especially your digestive tract, is full of moisture. Theoretically, if you at a bunch, you could trigger constipation, but eating that amount would be difficult and practically impossible to do by accident. It would be more likely to give you a bit of stomach upset. I don’t recommend trying.

The most dangerous part is the packet. There is a concern that kids or pets might choke on the packs, which is why they all are printed with ‘Do Not Eat’ warnings. The Illinois Poison Center says that it’s nontoxic. They recommend that a child or pet that swallows a packet and isn’t choking to drink some water.